A few months ago, Tetiana took a trek across the beautiful European continent.  In Italy she took some pics that I thought were very valuable to her experience and worthy of being shared with all arts & culture enthusiasts.  Above is a catalog of pics displaying the Duomo di Milano (Cathedral), the Roman Ruins, Italian Renaissance paintings & buildings, museums, and historic statues.  Below is a collection of pics with brief explanations and/or descriptions.  To all readers of cocktailmolly I hope that you enjoy this article.

Above is the Arco della Pace (Arch of Peace)

The architect Luigi Cagnola planned the Arco della Pace (Arch of Peace) in order to celebrate the victories of Napoleon in Italy. It was started in 1807 and completed only under the Austrian regime in 1838.

The architect kept the Arch of Septimius Severus in the Roman Forum as a reference, using a kind of marble form the Alps as construction material. Over the attic is located the imposing bronze chariot of victory by Abbondio Sangiorgio and the four goddesses of victory riding horses by Giovanni Putti.

The Arch was planned as the terminal of the long boulevard built upon orders by Napoleon to connect Milan to the Napoleonic Empire capital of Paris, it was actually one of the most impressive and innovative enterprises for the time. 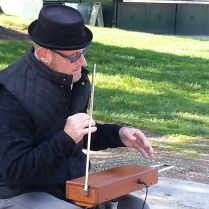 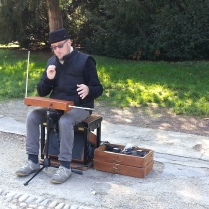 Above is a man playing a theremin.   The theremin is the only musical instrument you play without touching.
The theremin was one of the very first electronic instruments. It was invented in Russia around 1919 by Lev Termen. During his time in the United States he was called Leon Theremin and the instrument took on his name.

Leonardo da Vinci painting of a Madonna with Child

Tetiana Aleksina is a poet/writer and creator of the blog Unbolt.  She is currently undertaking many projects for the year 2016.  Her audience anxiously awaits.

8 thoughts on “Travels With Teti”