BLACK AND GAY? UNDERSTAND THAT SOME OF YOUR BROTHERS HAVE NO LOVE FOR YOU AT ALL! by Khalil Somadi

It is admirable and encouraged to uncover and study the illustrious history of the Black Man; his magnificence, the intricate beauty of his culture. That is Afrocentricity and that is a great thing.

But I have met so many brothers & sisters of the Afrocentric disposition who also infest that with their own personal prejudices and it is my opinion that that is very wrong.
You can’t slant the truth, bend and lighten or darken the truth for your own mental/emotional preferences. 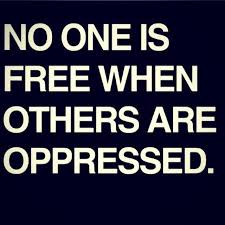 It is what it is!  And the truth is that heterosexuality is but One nature of Being.

I actually believe that we are all bisexual immediately after conception, and as our beings form and grow after those nine months inside our mother’s body we develop our capacities to see, hear, be vocal, experience sensory perceptions, understand; and that our chromosomes are set as to who we are.

In any case brothers & sisters here who are other than heterosexual, don’t let pseudo-intellectuals, wannabe prophets and blinded griots convince you that WE are but the product of the European man’s sexual deviance.
Homosexuals Are.
We have always Been.
And we will always Be.
No one’s homophobia could wipe out our existence Before, nor can it Now.

On another note, is it fair that what you do as an individual, gay man reflects on how the world thinks of gays as a whole?  No, its Not fair, but for the most part, that’s the way it is!  Same thing applies to being a black individual and carrying an invisible banner that says I am Black America!  You cannot make someone like you if they’re intention is not to like you, nor should you try, in my opinion!

Respect, however, is another story.

That’s why it matters that we are conscious of, what we say and do, and what it shows about our characters, albeit not just under the microscope of watching eyes, but in private as well. Why is this?  This is because both mindset and behaviors are cultivated privately first then, becoming a part of us, are acted out in the world at large.

No one is perfect. We’re “only human” indeed, but being human gets a bad rap sometimes and is often used as an excuse to be less than what we have the capacity to be. Therefore, if you ARE gay or black or both; you should have a concern about what you add or subtract to and from the Stereotype Pot.  We count as individuals! So make your individual choices count for the good of the communities of which you are a part.

Loving yourself is easier when you know who you are!

Khalil Somadi is a Jamaican-American that has written for Allpoetry.com, Nubian New Yorker, and Metamorphisis Newsletter.  He is an openly gay man, father of three, engaged and happily residing in Richmond, Virginia.

One thought on “BLACK AND GAY? UNDERSTAND THAT SOME OF YOUR BROTHERS HAVE NO LOVE FOR YOU AT ALL! by Khalil Somadi”