What Is Killing Africa By: Mawuli Dugbartey

This week we will be kicking off the Africa series.  In this week-long series, cocktailmolly.com will allow writers, artists, and thinkers from the continent express the beauty, pleasures, pain, culture and constant development of their homeland.  I hope you all enjoy. 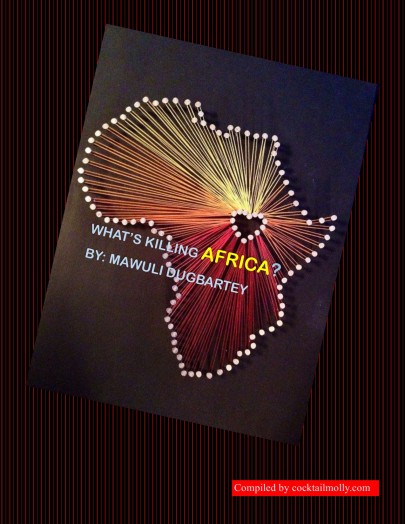 What is killing Africa

Tillotson: He that doth know those things which are of use for him to know is but an ignorant man, whatever he may know besides.

Recent decades have seen a dramatic increase in creative work on scientific ignorance and uncertainty, which can be traced in part to a realization that ignorance and uncertainty cannot always be reduced or banished from science, and that they are social and cultural products rather than merely part of the phenomenon. The fact that ignorance is negotiable and yet fundamental to scientific work poses several important dilemmas and prospect. We may be participating in a shift from the traditional research strategies of reducing or banishing ignorance toward a deeper understanding of and greater capacity to cope with ignorance.

Africa has the world’s largest oldest record of human technological achievements, the oldest stone tools in the world have been found in Africa and later evidence for tools production by our human ancestors has been found across sub Saharan Africa. The history of science then has, however received relatively little attention compared to other regions of the world, despite notable Africa developments in mathematics, metallurgy, architecture, and other fields.

Yesterday’s Africa was what our ancestors left for us but what we live in are Today’s Africa, science and technology has made us to understand how things function in this 21st century. The development of the continent has been slowed due to certain attitudes of some Africans; development can only be achieved when these attitudes are shunned by most Africans.

One will ask what these attitudes are;

Religion, Corruption, Poor leadership, Mismanagement of natural resources, Institutions, Leadership Incompetence, Dependency on foreign AID, these are just the few of what has made Africa underdeveloped. 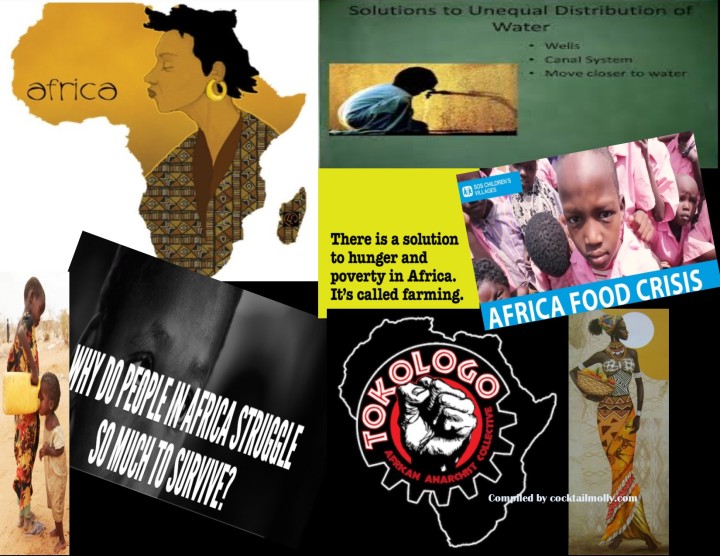 ‘’Religion is the opium of people’’ a paraphrased statement by Karl Max.

When religion is stretched too far, development of a nation becomes an issue. It cannot be denied that religion teaches moral and makes certain demands from its devotees and it cannot also be denied that most religious leaders are not practicing what they preach.

Moreover, several crimes are committed in the name of religion yet no one question such behaviour, doing that is seen as disobedience of the higher authority or invisible being. It is easily understood God is neither divisive, confused nor oppressor.

The main challenge of religion is that as long as many remain ignorant of what they are supposed to do or be, the few elites and leaders of the so called religion will take advantage of their ignorance.

Nowadays, any responsible person could easily offended by the increasing atrocities in the world. This is particularly true for Africans as the continent is highly suffering from various misdeeds and mischiefs. The major cause of all existing wrongdoings in our beloved and resource-rich continent is primarily poor leadership.

Indeed, many people in Africa do not have trust in their leaders. This is because most often than not leaders tend to abuse power for various reasons. It is often said by many that African leaders put first their personal interests than anything else. It is obvious that their self-interest may not be the interest of the public at large. Corruption, nepotism, egoism and abuse of power are the major characteristics of African leaders.

But, we need to bear in mind that there are also some exceptional African Heads Of State and Government that have been serving the interests of the general public from the very day their leadership. Source: http://www.allafrica.com

Corruption happens when public officials break the constitutional laws to fulfil their own personal interest. The most common types of corruption are bribery and extortion as well as allocation of public resources to favour political benefits (Obadina 2000). In many African countries, corruption takes place as a rule based for decisions. That is, public officials influence the economics decision in detriment of the entire society. This results in inefficiency and high transaction costs as well as distortion of transparent and normal market operations and thus, creating insecurity for investors. Typically, African countries have a weak tax base and the policy makers lack integrity thus, facilitating corruption. Corruption is strongly correlated to poor public governance, however, the causality difficult to recognize (Siebert 2006).

To begin with, Africa was colonized by powerhouses, such as France and the UK.

While there is supposed “independence” for most countries, there is also much corruption and exploitation which was discussed earlier.

Africa as a continent has many valuable natural resources, including mahogany, coffee, cocoa, oil, gas, diamonds, gold, uranium, and coltan (rare, used in computers), as well as others. Modern-day powerhouses want these resources at a cheap price; so they go over and take it.

Foreign businesses will also arrive in Africa and, with the help of corrupt local government officials, will extract the precious resources. For example, in 2004 China owned 40 percent of Sudan’s oil resources (1). Child labor, as well as cheap labor, is used by these companies. For example, Hershey (the chocolate company) was under fire for using child labor to obtain their cocoa (2). Because foreign businesses are arriving in Africa and taking the resources, none of that money is going back into the African economy and aside from the pathetic wages that are being paid to labor, if at all. (Megan Romania, 2016).

In addition to the colonial powers building roads and ports designed to extract materials from various countries rather than utilize such resources locally the competition between European powers ensured that virtually no routes between countries were built or maintained.

There is hope, particularly with China’s interest in building ports, rail, and roads for its own exploitation of Africa’s resources. It’s not the best model, consisting as it does of neo-colonialism, but it is better than nothing. European countries and businesses are still in the game too.

Institutions are rules of law governing the behaviour of the society. Generally, in most African countries institutions have been a failure because they serve to protect or support personal interests of the elite or leadership. Consequently, the government does not provide efficient institutional framework to sustain good governance, transparency and accountability from its institutions. In many African countries, weak institutions do not secure the required long run sustainable growth. However, many African leaders are contented with short term a solution that imposes long term cost for the nation. (For example: the budget deficits controls). Therefore, since the countries do not have a sustainable and efficient tax system some rely on monetizing through the central bank or public debt (Siebert 2006).

The functions of institutions consist of creation and implementation of economic policies, service delivery, and ensuring efficient use of public resources as well as law enforcement. Thus, good governance implies efficient institutions. Consequently, a weak institution acts as a barrier to sustainable growth in Africa. (Amoako 2003)

According to Khan and Senhadji (2000), poor governance by African countries has led to poor economic growth since it affects negatively investment, productivity, foreign Aid, consumption etc.

Most African countries depend on external aid, thus, the efficient absorption of Aid to as well as the attraction of international donors would depend on quality of public institutions and service delivery accompanied by high skilled servant and capacity building.

Dambisa Moyo is a Zambian born economist who says aid is killing Africa.
In her new book, Dead Aid, she argues that official aid is easy money that fosters corruption and distorts economies, creating a culture of dependency and economic laziness.
Moyo is particularly dismissive of the ‘celebrity aid’ model popularised by international stars such as Bob Geldof and Bono and says many aid organisations and NGOs are more interested in perpetuating poverty in order to justify their own existence. Source: www. abc.net.au

Therefore, strengthening the rule of law and property rights, improve the regulatory burden and avoid political violence would attract donors thus, increasing the probability of increasing the growth rate.

The strength of every society depends largely on its leadership. Throughout history successful societies have been those whose leaders were able to rise to the occasion to calm storms during crises and advance the course of prosperity during peace time. During economic hardships, poverty and wars it is the leaders who make tough economic and military decisions to steer the nation out of those troubles. However, leadership incompetence is a key factor in entrenching poverty in almost all African societies.

The leadership in Africa today could be likened to a bad chef who has all the ingredients needed to prepare a delicious soup but fail to do so. For instance Africa is home to half of the world’s untapped natural resources. The continent receives the highest amount of sunshine comparable to any landmass in the world which when taped could supply cheap and constant supply of electricity to the whole continent and beyond. It is estimated that the solar energy potential of the Sahara Desert alone could power the whole of Europe. This is what the Finnish president said on a visit to Nigeria in March 2009, Nigerian people have so much sun and wind, why don t they use it for the generation of light for cooking and every other thing? She queried, and added that we do it in Finland for our renewable energy. Source: http://www.dailytrust.com, 12 March, 2009.

The continent is home to a lot of valuable minerals such as gold, diamond, coltan, copper, bauxite, Uranium. There are huge diamond and gold deposits in Botswana, Namibia, Liberia, Sierra Leone, Ghana and South Africa. There are huge copper deposits in Zambia and Guinea. It is estimated that mineral deposits in DR Congo alone could fetch the country 23 trillion dollars.

In this 21st Century, Africans need leaders who will not hide behind diplomacy and condone negative practices by their colleagues such as subversion of the constitution and subjugation of the people. Source: http://www.mordernghana.com.

Conflicts and crises such as civil strife have affected governance in Africa as well as the establishment of sustainable growth performance. Although some countries have recovered from civil wars, good governance remains a challenge. This includes boosting national capacity to avoid crises in governance, maintaining good internal relationship and peace building, as well as reinforcement of issues regarding national security reducing and crime (World Bank 2005).

Institutions and human rights: leaders and society need to respect constitutional rules as a pillar of the rule of laws. Thus, any disrespect of laws would be a threat to stability. Additionally, the integrity and independence of the judiciary should be improved as it can reduce structural constraints. Protection to people’s rights including minority groups and vulnerable population should also be improved (World Bank 2005). Source: http://www.ukessays.com

Mawuli Dugbartey is a scientist from Congo, now residing in Ghana.

2 thoughts on “What Is Killing Africa By: Mawuli Dugbartey”